When you are young the year just seems to drag by…. months seem to last for years. But as you get older the year just flies by in the blink of an eye. Unless you have a child who is oh so excited about her birthday.

I really love my daughter but once Christmas is gone all she can talk about is what she is doing for her next birthday. Now I wouldn’t have too much of a problem with this except that her birthday is in September.

So far this year she has decided to have a party at Jump and Bounce, a dress up party at home where people will dress up as band members from the Gorillaz (I’m pretty sure most of her friends wouldn’t even know who the Gorillaz are) to a dance party.

All this birthday talk has done one thing. We have placed a ban on talking about party plans until July….. not that it has helped. 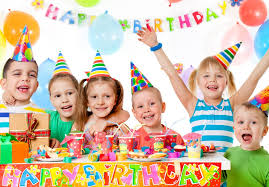